DAVE SAVAGE
Fun and learning games with kids and teens
These are good to do, especially when traveling
Collected, edited and some created by Dave Savage
DaveSavage.com  Atlanta GA  dave@davesavage.com  404 323-8686

Will you have a bored kid in the car? Not only will they tend to whine more and require more attention, but you usually just end up feeling lousy for giving them so little stimulation as you trek cross-country.
Car games don’t have to be a last resort for a bored kid. They can help bond the two of you (or the whole family) and keep you both sane on a long car trip. After all, that’s how they did it in the old days. Here are some fun and learning ones for all to enjoy — no screens allowed. And many of these will also help with school and life skills and knowledge.

I Spy -  Now, you knew this was going to be first on the list — and it’s still among the best games you can play. “I spy, with my little eye, something ___.” Could be red, green, blue, whatever catches your eye in the car.  A classic game that really couldn’t be improved on.

License Plate - Another classic that couldn’t be simpler: You, your kid, and maybe their sibling try to find license plates from all 50 states. Whoever finds the most is the winner. There are varying rules for this game you can improvise — adjacent states are two points instead of one, for example — but kids will love the chance to get competitive while they learn a little geography. Extra points to find Canadian provinces, too.

Twenty Questions - Let their limitless imagination run wild. Your kid will think of something, anything—an object, an animal—and you have twenty yes-or-no questions to figure out what they’re thinking of. “Can it fly?” “Does it swim?” So on and so forth. Your kid will be dying of laughter as you struggle with their genius.

The Alphabet Game - For little ones: have your kid kid will try to find something outside that starts with A, and then B, then C, and so on until you get to Z. For older kids: Have them pick the left or right side of the road, and you’ll take the other. You each find the letters in order in the world (a sign with an “A” on it), and the first one to complete the alphabet wins. Good, healthy competition.

Going on a Picnic - Another alphabet-based game, this one starts with you saying “I’m going on a picnic, and I’m bringing an apple.” You kid then has to name a food that starts with B. Then you do C. It goes back and forth till you get to Z—then you’ll probably have to stop for a snack.

Counting Cows - Obviously, it doesn’t have to be cows, but it helps to be driving in the country. Your kid has to count the cows they see on their side of the car, and you on yours. If either of you see a cemetery on the opposite side, shout “Your cows are buried!” and your opponent loses all their cows. But you have to keep your eyes peeled—and focused, as you kid will try to distract you from counting or noticing the cemetery. The one with the most cows at the end wins.

Simon Says - Simon says raise your right hand. Simon says raise left foot. Raise your left hand. Ah, but Simon didn’t say, did he? This classic out-of-car game can be adapted for the road, albeit carefully. Don’t ask anyone to remove their seatbelt or stand up, please.

Story Time - You start a story with a sentence or two—then you stop. Your kid then says the next couple of sentences, and stops. Their sibling, if they have one, chimes in. And on and on until at the end of a long car ride, you have a masterpiece. Bonus points (and sweet memories) if you record the whole thing.

Rhyme Time - Say a word on a sign or something that you see. Try to think of words that rhyme with it. For example: “car” rhymes with “jar,” “star,” “bar,” and so on.

Silly License Plate Sentences - Use the letters in license plates to invent crazy sentences. GBD 465 could be “Gorillas buy donuts.”
Find the Color = One person picks a color to find. The first person to find that color on something outside of the car wins and picks the next color.

A to Z Game - Use signs and license plates to find each letter of the alphabet, starting with A and continuing all the way to Z.

License Plate Numbers - Start at zero and find consecutive numbers from 000 to 999 or any number combination(s) you specify.

Scavenger Hunt - Make your own list of scavenger hunt items to search for on the trip. Let your kids take turns making these lists.

20 Questions – Guess Who, What, Where - One person thinks of something and says whether it’s a person, place, or thing. The other people in the car each ask questions that have “yes” or “no” answers.

Round Robin Storytelling - Take turns inventing a story. One player makes up the beginning of the story then the other players continue it. Try to incorporate landmarks, signs, or other things you see out your car windows into the story.

Would You Rather? - Use your imagination and ask other players to pick one of two situations. Start with the prompt “Would you rather … ?”

Name that Tune (or Artist) - Have someone with an iPod play song selections — decide how many seconds to play each and which point in the song to start from. See who can name the tune or artist first.

I’m Going Camping Game - The first player thinks of a rule for the game but doesn’t tell anyone. The rule could be things that are black, things that start with the letter “M,” things that grow in the ground, or anything like that. The player then says, “I’m going camping and I’m bringing _____ ,” and says something that fits with the rule. The game continues with the next player saying what he will bring. If the player guesses the rule and brings the appropriate thing, he can “come along.” If not, “Sorry, you can’t go camping.”

Tic Tac Toe - All you need are two players and a pencil to play this popular standby. Player One places an X on the grid, Player Two plots an O. They continue to take turns until one player has three across. (spoiler alert - if the first or second mark is in the center, nobody will likely win)

I’m Going on a Picnic - This alphabet-based memory game is great for kids 5 and up. You don’t need a game board or any materials. The game can be played with as few as two players, but it’s more fun when the whole family joins in. The first player says “I’m going on a picnic and I’m bringing...” followed by something that begins with A, such as apples. The second player repeats what the first person said, but adds something that begins with B. So she might say “I’m going on a picnic and I’m bringing apples and bananas.” And so on with C, D, and the rest of the alphabet. If someone forgets an item, she is out. The last player to be able to recite all the items on the list wins.

Family Trivia – how much do they know and remember? – Names of extended members. Where people were born and grew up? Birth and anniversary dates?   Peoples education and professions?  Things people were known for?  Diseases and conditions that run in the family?  What did family members die of?

10 ways to say and express it. – Pretend you are at a theater or movie role tryout or rehearsal.. The director  will ask you to say your line in many expressive ways. “mom, I have to go to the bathroom!!! “When are we going to get there!!} It’s public speaking practice.too.

The Guesstimate game – For our entire lives we need to come up with these figures, or a range of them, for our own benefit or for our recreations and professions. Many times we are wrong, but by how much?  When you all see something or someone, compare your answers to the questions of:
age?
weight?
height?
distance?
speed? (how fast are we going? How fast are they going?
volume/ teaspoons/tablespoons, pints, quarts, cups, gallons?
square feet?
number of acres/square miles?
angle from you?
cost/price – new /used a you see it?
name of the color?
name of it/what is it?
temperature?
how many do/did you see,
what shape is it?
dimensions - What are it’s English or metric dimensions in various increments.
time – raise your hand when a specified amount of time has gone by, starting now?
How much time has gone by since we all saw or did something?

Scholarship word game – Everyone, as fast as you can, say a word that begins with the letters of the alphabet.
Everyone starts with a word that starts with A, then everyone says a word that starts with B and so on.  You are looking to impress others with your vocabulary. Little kids can use simple words, but you are likely to be impressed with what they know. For increased difficulty you can require a word definition or to use the word in a sentence. You’ll want to have a print or on-line dictionary to share and defend the word meanings. For teens, you can bring along a list f words from the SAT or other college entrance exam lists of words to know. Everyone say or guess the meaning of
a word and how to use it in a sentence.

What’s on the menu? – There is a lifetime of value in knowing food preparation terms and what is being offered and served at restaurants and homes of friends and relatives. The kids can use their mobile devices, doing the research to learn and share with the family what they learned on the journey. (IE: poached, julienne, fricassee, frits, blanch, empanada, crudité, braised, trifle/tiramisu,  etc)
Would they really want to miss eating something that is really delicious for most kids?
Gather some to-go menus to test their beginning and growing knowledge on your journey or when planning a trip.

Family relationship names – How are your extended family members related to you?  Aunt? first cousin? Second cousin-once removed? Your grandfather’s brother? Your first cousin’s half sister?   See the chart to help figure it out. There is the technical description and also the emotional connection name. Sometimes there is an honorary name when there are parents or relatives in
same sex relationships or when relatives or close friends take on other caring roles. Have a meaningful conversation with people who are in honorary relationship roles about what they would like to be called or described in private or in public. 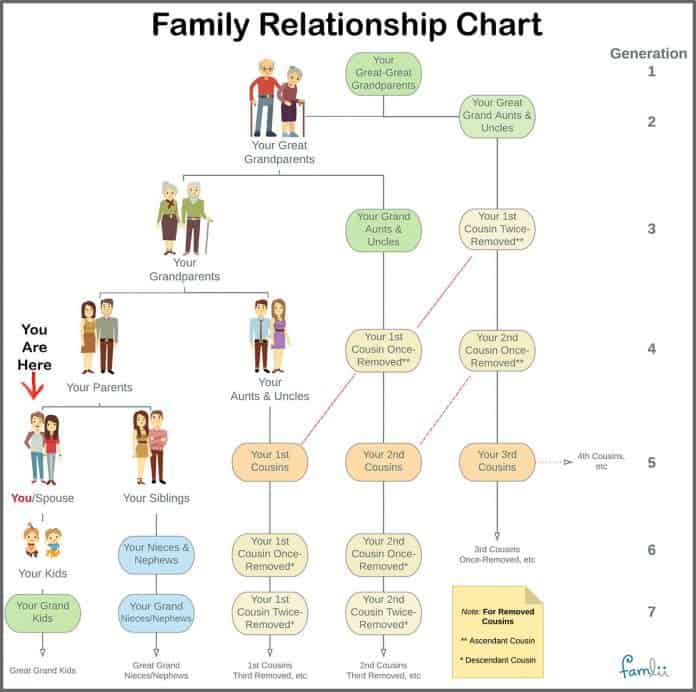