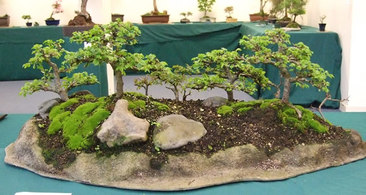 What is Saikei “Sigh – Kay” Saikei consists of two Japanese words, 'Sai' meaning a plant and 'Kei' meaning a view or a scene Saikei has developed a harmony in presenting miniature landscapes and has matured from a horticulture approach to thickening bonsai into an independent and evolving art form which is easy on the pocket but has a significant wow factor when the balance and harmony is achieved.

The art of Saikei is simple and affordable to get started in and we would like to support you as you start your journey of discovery.  At its simplest all you need to get started is a shallow pot, rock or rocks, soil, a small tree or small trees and imagination.  We hope you take up the challenge and you find your Saikei as enchanting as fellow artist in Japan, Europe, Russia, South Africa and the United States of America and other nations as Saikei spreads by storm.  Many other artists have and joined us to date to discover the key success factors and styles that will elevate your art to another level of appreciation.

You will find a wealth of resources on this website but this is the tip of the iceberg and we look forward to sharing your journey of discovery, the first step though is starting and this is your challenge.

What are the elements that make Saikei?

A Saikei will include rocks, trees, aggregates, mosses and other suitable plants.

What makes a Saikei?

Toshio Kawamoto who was the bonsai master that rediscovered the art of Saikei stated that the art differs from its nearest cousin Bonsai in that rocks are a requirement in Saikei and that the trees, rocks and soil level is always above the level of the pot

What are the merits of Saikei ?

Students often say that what they like about Saikei is its ability to take you out of yourself, to provide a place of peace in a frantic world. It can be argued that through Saikei it is possible to visit places without leaving your back garden, for some it is a reminder of places they have visited on holiday. For me it is a mix of the technical and artistic challenge with the peaceful presence of these compositions. Saikei is different things to different people.

What kind of plants are suitable for Saikei?

You will not need any special plants for Saikei and most material will be able to be sourced from your local garden center at reasonable cost. You will need to adjust the sort of material you use to the climate you live in but apart from this you just need to bear in mind some basic principles discussed later in this book and you will be fine.

What are the rules of Saikei?

There are no rules however there are guidelines that will help you when you first start in Saikei. As Saikei is an art form there are no restrictions to what you can and can’t do you are free to explore what has been achieved in the past and what will be possible in the future. Saikei is as boundless as your imagination.

Are Saikei difficult to care for?

The answer to this is a definite NO, putting it simply if you are able to care for a planted tub, potted plant, etc... you will have no problem with keeping a Saikei. The techniques can all be learned through this book and by a bit of practice.

How many years does it take to make a good Saikei?

The answer to this varies based on the type of landscape you wish to create but in most cases students and audiences are amazed that after just a few hours work you can have a composition that is very reminiscent of the landscape used as inspiration. You can see this in action in the photo projects.

How long do Saikei last?

A Saikei with proper care can last as long as you wish however they do have a finite point because the trees will eventually grow too big for the composition. That said I have Saikei that were originally created 18 years ago and they will probably be ok for another 18 years without becoming too large for the composition, so Saikei are not temporary by any means. Of course the trees used in the Saikei will outlive me and can continue to be transferred to larger Saikei compositions or trained on as Bonsai.